A skier received first aid after being swept up in a backcountry avalanche. The slide occurred shortly after noon in an area of Mount Seymour Provincial Park near the Seymour Alpine Trail.

Gareth Fafard had come off the 1st Pump Peak on the southeast side, hit the snow and triggered the size 1.5 avalanche. He was pushed several meters down the slope into the wooded area. He hit a tree and broke his left femur during the avalanche. 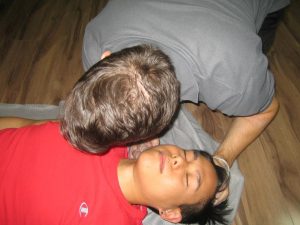 Timely delivery of appropriate first aid is vital during emergencies.

According to NSR’s Peter Haigh, there was no bleeding but he was probably bleeding internally which is a serious injury. Fafard was out by himself but luckily his fall was witnessed by a nearby snowshoer. The bystander rushed to the skier’s aid and called for help.

The ski patrol went out and got to the scene first, though Fafard was in the backcountry of the provincial park and not at the ski resort according to Haig. The skier was not out of bounds but was in an area not covered by ski patrol.

Initially, the rescuers hoped to airlift Fafard to safety but dense fog blanketed the area and the rescue helicopter was forced to land and shut down. Snowmobiles were used to take rescuers most of the way and they snowshoed the final couple of kilometers to get to his side.

The injured skier was loaded on to a stretcher and brought to safety nearly 8 hours after the avalanche. Among the volunteers were a new North Shore Rescue medical team.

It took around 25-30 people to evacuate the skier over land, but having the physicians there provided optimal first aid care during the transport. Fafard remained hospitalized where he was scheduled for surgery and a scan.

Timely delivery of appropriate first aid is vital during emergencies. You can be prepared by enrolling in a first aid course today.