The victims of the Fernie ammonia leak incident given first aid. The three people who were believed to be killed by an ammonia leak at a Fernie, B.C. hockey arena were workers performing routine maintenance.

The deceased have not been identified publicly but Mayor Mary Giuliano stated that two of them were locals who worked for the city. The third victim was a contract employee from Calgary who worked for CIMCO Refrigeration. 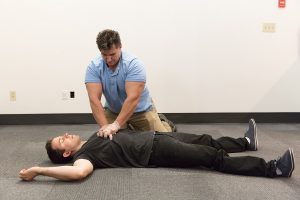 Cardiopulmonary resuscitation (CPR) is an essential skill that you can learn in a first aid course.

Some of the properties surrounding Fernie Memorial Arena remain under an evacuation order. According to the officials, the state of emergency will last seven days unless the city or minister decides it can be cancelled sooner.

The fire crews arrived at the arena to find a bystander performing CPR on one of the victims. They found the two others inside shortly after but were forced to leave the premises for their own safety.

The leak was identified as anhydrous ammonia which is a chemical used in farming, cleaning products and refrigeration systems.

Cardiopulmonary resuscitation (CPR) is an essential skill that you can learn in a first aid course. It is a life-saving technique that can save a life by improving the chances of survival during emergencies.