A 41-year old Kingsville man died after attempting to save his son in Lake Erie near Cedar Island. The Kingsville Fire Department, OPP and Essex Windsor EMS responded to a report of a boater missing in the water of Lake Erie close to Cedar Island on Tuesday.

According to police, Tyson Koehn was operating a small vessel with 4 children. He entered the water to help one of the children who was swimming and seems to be struggling. According to the OPP, Koehn started to struggle and went under the water. 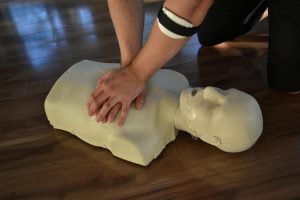 A search was carried out and Koehn was found in the water after a short while and the EMS performed CPR.

The 4 children were rescued by a boat and a citizen on shore who swam out to help. Koehn helped his 7-year old son Trenton who was struggling in the water. While Koehn was holding Trenton above the water, Koehn started to sink and went under, no longer resurfacing.

A search was carried out and Koehn was found in the water after a short while and the EMS performed CPR. Koehn was transported to a healthcare facility but later declared dead.

According to close friends, Koehn was enjoying a day off when the winds became strong in the lake and things shifted to a disastrous turn.

Learn how to help by enrolling in a first aid and CPR training and for more information, check out these sources: