On a sunny morning, Gordon Andrusiak went out for a brief jog close to Neil Nesbitt Park in Barrhaven. He was diagnosed with a heart condition but has been exercising regularly and eager to include jogging into his regimen.

In a short while, he was found by a group of workers wearing orange safety vests. Andrusiak collapsed on the ground and was unconscious.

A motorist who was passing by, Adele Gawley and a City of Ottawa parks employee, Troy Featherston worked hand in hand to save Andrusiak together with the paramedics who arrived a short while after and transported him to a healthcare facility. 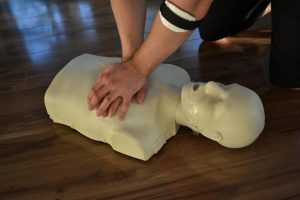 Andrusiak and his wife have taken CPR training before and decided to go through the courses again.

After 2 months, Andrusiak is under-recovery from heart surgery and doing fine. He could not remember any details of his heart attack.

Save lives with CPR training

According to Andrusiak, he found it interesting after listening to the experiences of those who helped him.

Andrusiak and his wife have taken CPR training before and decided to go through the courses again. It is vital that people intervene and take initiative during emergencies.