It was a big save for the goalie of Gander Flyers before the team faced the Corner Brook Royals.

When a fan collapsed and loses consciousness, the bystanders at the Newfoundland Senior Hockey League game rushed to the change room of the Flyer’s to get Patrick O’Brien.

O’Brien is a paramedic who was wearing half of his hockey gear while delivering CPR on the man. According to O’Brien, he was simply at the right place when the incident occurred. Other paramedics were also at the scene including Gander Mayor Claude Elliot. 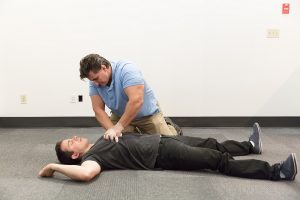 O’Brien is a paramedic who was wearing half of his hockey gear while delivering CPR on the man.

According to Elliot, he and two paramedics shifted turns in performing CPR while waiting for the arrival of the ambulance. In such instances, it is best to remain calm. The man who collapsed was breathing again by the time the ambulance arrived at the scene. After some time, the condition of the man was stable.

There was a portable defibrillator in the stadium but it was not necessary at that time.

Learn how to help by enrolling in a course on CPR and for more information, check out these sources: