The victim of an evening crash in Langford received CPR. The cause is likely a medical emergency.

A woman in her 60s was taken to a hospital in serious condition after crashing her vehicle into a tree on Westwind Drive, near Atkins Avenue in Langford. Const. Nancy Saggar, West Shore RCMP media relations officer stated that the driver was believed to be having a medical emergency at the time of the crash and sustained serious injuries. 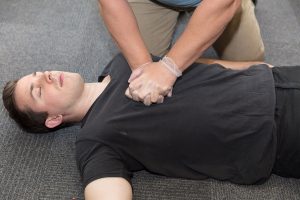 According to Capt. Paul Oberstellar with the Landford Fire Rescue, once the driver was removed from the vehicle, CPR was started and revived on scene.

Langford Fire Rescue, West Shore RCMP and BC Ambulance responded after 7 PM to reports of a vehicle being driven into a large tree.

The tree fell onto the vehicle, complicating the first responders’ extraction of the driver and then onto the road blocking one lane of traffic.

According to Capt. Paul Oberstellar with the Landford Fire Rescue, once the driver was removed from the vehicle, CPR was started and revived on scene. She was taken to a healthcare facility and her condition remains unclear at this time.